Marking the end of 2021, a boat carrying 105 Rohingya refugees was brought ashore after an 18-hours dramatic rescue by the Indonesian Navy amid high tide and stormy seas. Mostly women and children, the group has been at sea for nearly a month.

This is the fourth Rohingya boat arrival in Indonesia in two years.

The local fishermen, the government, IOM, and its partners all joined hands in the humanitarian efforts to save their lives. The following are stories from the field.

Panglima Laot and the initial rescue

The boat was first sighted by local fishermen, a member of the Panglima Laot (See Commander), a traditional Aceh fishery institution, a legacy of the Aceh civilization in the past, which remains alive and continues to evolve to this day.

"On December 26th, one of my fishermen sent me a message saying that he found a stranded boat full of starving people about 100 km off Bireuen. I immediately contacted related authorities, and other stakeholders passed the information and requested permission to bring them ashore. And while waiting for the decision, few of my fishermen provided them with food and water," said Badruddin Yunus, Commander of Panglima Laot (Sea Commander).

Badruddin, a-50 year-old, has been the Commander of Panglima Laot for Bireuen regency for the past nine years. He was also involved in the rescue of the previous boats. When asked why he and his fishermen helped the Rohingyas, Badruddin said, "Our customary law includes helping people in need in Aceh waters regardless of race, religion, and cultural differences. Moreover, all of us still remember 17 years ago, on the same date, Tsunami hit Aceh, which was a devastating moment for our people. But, in our despair, the international community helped us in the name of humanity."

A journal article by Wilson and Linkie (2012) mentioned that the December 2004 Indian Ocean tsunami claimed an estimated 167,000 lives, including 14,000 fishermen and 59 of the 193 traditional marine leaders (Panglima Laot).

"These local fishermen were terrific. First, they collected money and bought a few food and drinking supplies for the Rohingya group, such as rice, milk, bread, mineral water, also cooking gas. Then, they took the supplies to the Rohingya boat," said Nasruddin, Humanitarian Coordinator, Geutanyoe Foundation in Lhokseumawe.

The Geutanyoe Foundation is currently working closely with Panglima Laot in the province (not just Bireuen; 9 regencies/ cities) and in the process of formalizing the search and rescue (SAR) teams within the Panglima Laot body.

"We know that most fishermen in Aceh waters have been doing or helping search and rescue activities for Indonesian nationals or foreigners, but we believe that formalizing the SAR teams within the Panglima Laot would make their SAR efforts more structured. This is also in line with the European Union's humanitarian effort to support the safe embarkation of refugees stranded at sea," added Nasruddin.

The arrivals of the Rohingya group in Lhokseumawe

On December 29, 2021, the Head of the National Refugee Task Force released an official statement to the press that the Government of Indonesia would bring the boat with Rohingya refugees ashore in the name of humanity.

The day after, the Coordinating Ministry for Political, Legal, and Security Affairs issued a policy letter addressed to the Governor of Aceh Province regarding the rescue and humanitarian assistance for Rohingya refugees. As instructed in the letter, the Governor of Aceh then communicated with the Navy, the Police, and the Search and Rescue Agency, to bring the boat ashore and place them in the temporary shelters in Lhokseumawe.

The boat arrived at the port of PT. Pupuk Iskandar Muda on December 31, around 00.15 Western Indonesian Time. Soon after their arrivals, they were taken to Lhokseumawe and arrived at BLK Kandang, a temporary shelter, on January 1, 2022.

"The first time I heard about the group was from online news. I read about a boat with passengers bobbing in Aceh waters around 67 miles off Bireuen on December 26, 2021. The local fishers suspected that the passengers were Rohingya people," stated Marzuki, the Head of the Protocol and Communications Section of the Leadership (Prokopim) of the Lhokseumawe City Government, Spokesperson for the Lhokseumawe Refugee Task Force.

"When the official letter came, the local government of Lhokseumawe stood ready to support and also involved in all the coordination meetings. Given our experience with the previous arrivals,  Lhokseumawe is selected to host the Rohingya refugees at the BLK Kandang, a temporary shelter recently refurbished by IOM with financial support from the US, European Union, and Sweden," he added.

When the Navy brought the boat, Marzuki was waiting at the port in the rain. He said he applauded the Navy, who brought the ship ashore against the high tide and stormy seas.

According to Marzuki, the critical success of the current response lies in being well prepared. "Everyone already knows their roles and responsibilities—no confusion in who's doing what, when, and how."

He also said that Lhokseumawe is not an official area to host refugees, and he referred to the Perpres No. 125/2016. "We are hosting the refugees based on humanity," claimed Marzuki. 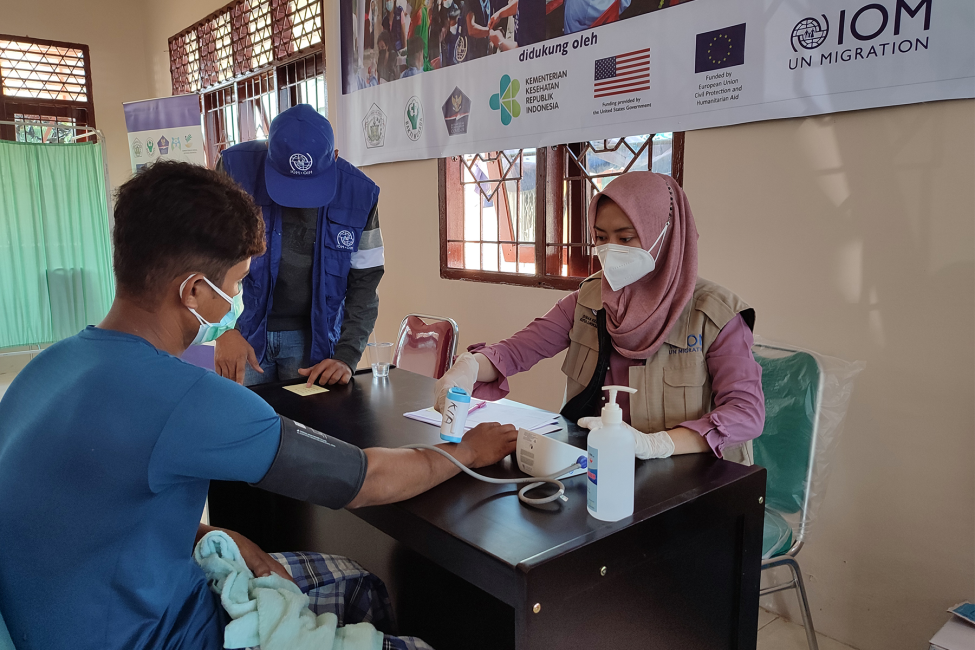 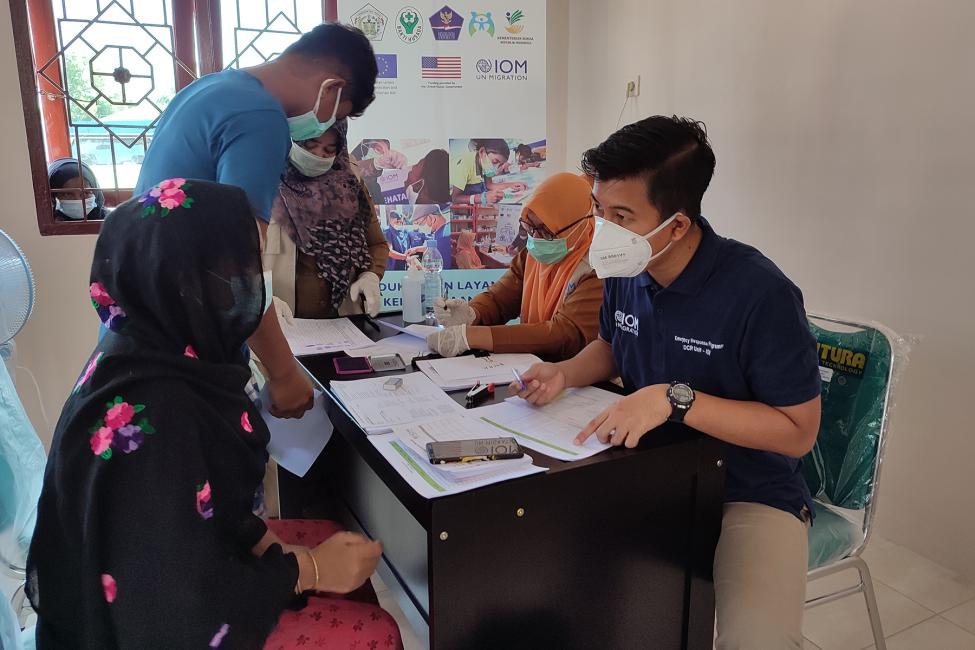 On December 28, IOM deployed an advanced team of emergency medical, operations, and protection staff to coordinate with local authorities, particularly health counterparts, to ensure a safe arrival and screening for immediate health and nutritional needs. Along with the UNHCR registration process, shelters, bedding, food, psychosocial support, and counseling are the first lines of assistance addressed by IOM and partners.

"I arrived in Bireuen on December 28 with the other advanced team members. We took part in the coordination meeting with related stakeholders to prepare for the safe embarkation. My focus was specifically on the medical aspects, including screening and swab test of the latest arrival," said Muchamad Andi Wibowo, Programme Assitant I (Health Care), IOM in Indonesia.

As soon as the group arrived, the local health office conducted primary health screening and swab tests in coordination with the COVID-19 Task Force and IOM. After that, the group boarded the bus to the temporary shelters at BLK Kandang in Lhokseumawe.

Andi claimed that "compared to the previous arrivals, IOM and all related stakeholders are more prepared." He also said that "the safe embarkation process went pretty smoothly." When asked about the health condition of the group, he stated, "we did not find any significant problems from the current group compared to the previous ones. The children are primarily healthy and active from this group."

Andi and the other advanced team members have extensive experience with past arrivals. However, the team still considers the language barrier and cultural differences are the two biggest challenges they must face from time to time.

"When the group arrived past midnight, it was pitch dark, stormy weather, and seeing the kids were in the cold, then the women were screaming for help made me feel very emotional. I wish I could speak their language to say some comforting words," said Andi.

Additionally, Andi said, "I could not communicate directly with married women, and the husbands did all the communication. The patriarchal culture is quite strong in their community, making the males more dominant and powerful than the women. So the women become voiceless, and they think that a man being very strict with the wife is normal, and they do not think it's violence." 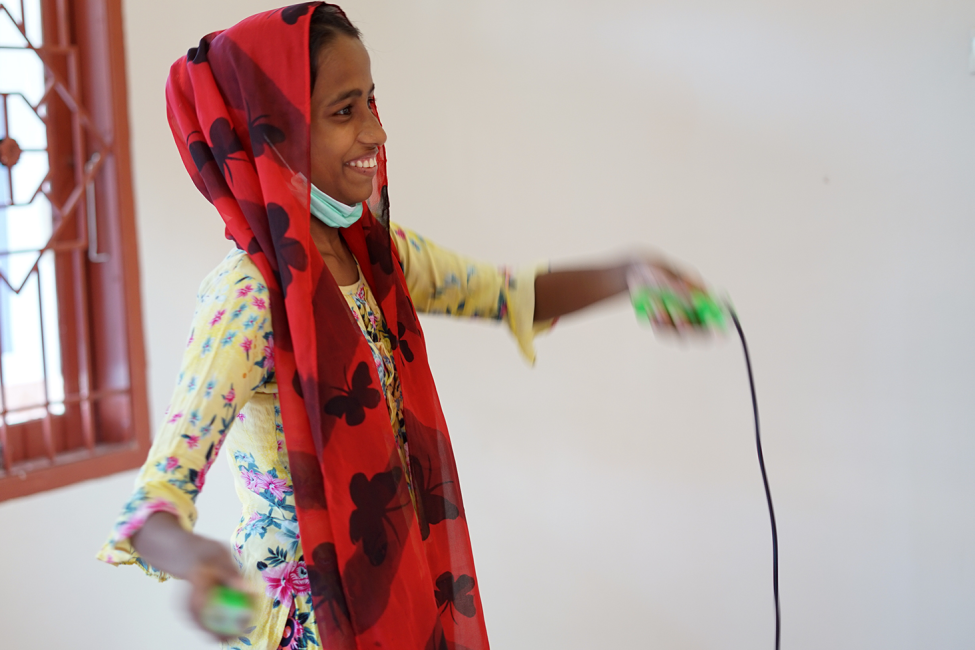 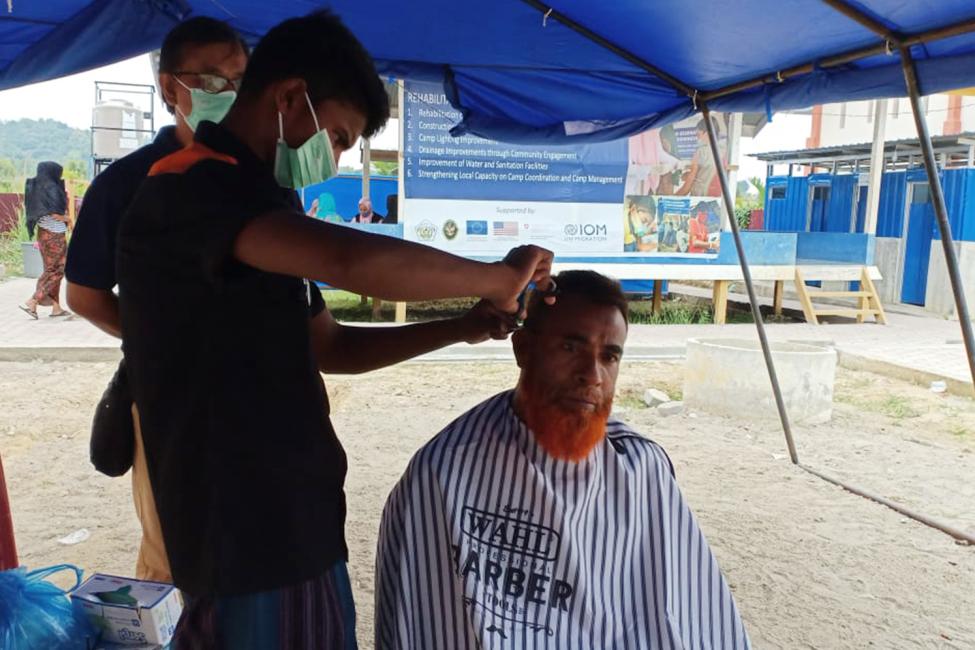 Fatimah, Nurhabah, Azizul, and Abdul Hamid are among millions of Rohingyas who must flee their country because of conflict. The four of them fled to Bangladesh with their family in 2017, hoping for a better life, but they claimed life was no better. So, they set to sail to Malaysia. But unfortunately, their boat was broken, and they were at sea with just a little food and drinking water to get by.

"It was a terrible experience for me. I thought I was going to die halfway. We continuously recited surah from the Quran, Yasin, and ayat Kursi. We are very fortunate to have come here. We are very grateful to the local fishers who found us at sea and helped us at the time," said Fatimah.

Nurhabah added, "It was terrifying. I thought I would never make it out alive with the storms and the high tides. But, it was such a relief when a few local fishermen came and helped us. They gave us drinking water and cooked some food for us."

After their boat was brought to shore, they were placed in the temporary shelters in Lhokseumawe.

IOM’s emergency response to assist the Rohingya disembarkation in Aceh is funded by the European Civil Protection and Humanitarian Aid Operations (ECHO), Swiss Agency for Development and Cooperation (SDC), and the U.S. Department of State’s Bureau of Population, Refugees, and Migration (PRM).

A Journey to remember: Learning from Indonesian ex-migrant worker

My family is my future: Asadullah’s story