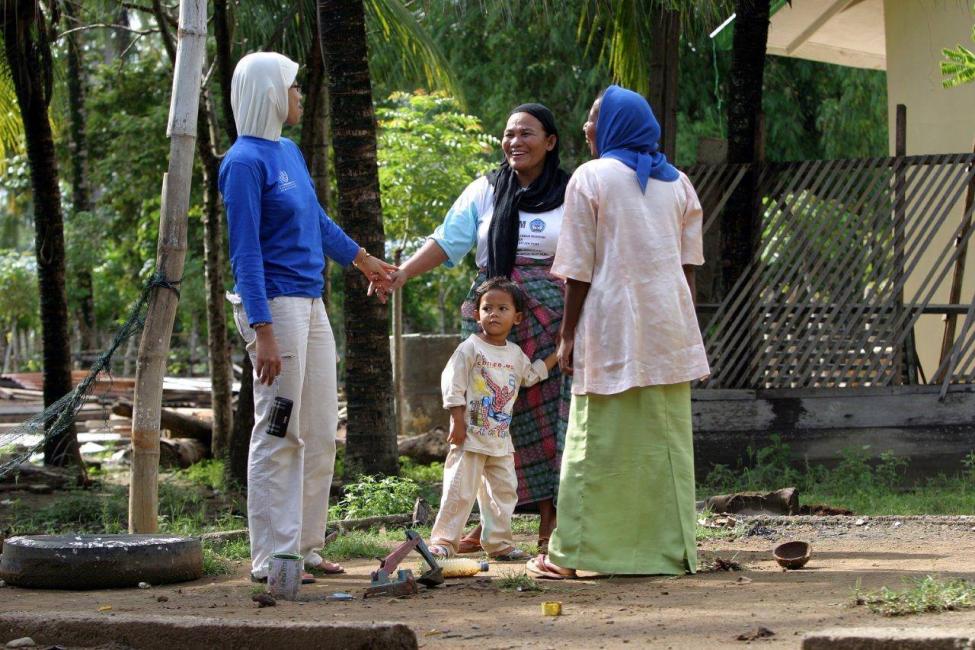 Financial empowerment is a key element of IOM’s grassroots prevention work to reduce the susceptibility of women to the lure of traffickers. Photo: IOM

Jakarta - Today is World Day Against Trafficking in Persons. This year, the United Nations is drawing attention to the importance of hearing the voice of victims. Making their voice count is a fundamental part of determining effective steps both in preventing and addressing trafficking in persons. Hearing them does also mean putting them at the center of the assistance and counting them as active actors in their reconstruction.

In line with this theme, the Anti-Trafficking Task Force (ATTF) in Indonesia with its "Joint Synergy in the Eradication of TIP" theme focused on prioritizing the best interests of victims in every step of its action.

According to the ATTF five-year report (2015-2019), there were 2,648 victims identified in Indonesia 88% of them were women and 12% were men. They had been trafficked both domestically and cross-border for different reasons.

Although the COVID-19 impacted heavily on the restriction of movement, unfortunately, it did not stop the practice of human trafficking. Instead, the number increases from last year due to job scarcities amid the pandemic. Moreover, the current trend shows that women and men have their own vulnerabilities when it comes to the risks of being trafficked. In 2020, IOM Indonesia and its partners provided direct assistance to 154 victims of trafficking in persons. they had been trafficked for labour exploitation, sexual exploitation, or both.

The Ministry of Women's Empowerment and Child Protection joined efforts with IOM Indonesia to conduct a series of awareness raising actions to enhance general public knowledge about the dangers of trafficking in persons. The social media campaign invited the public to know what human trafficking is, how the process is, and what to do if you see something or you are caught in it?

The informative and interactive activities are presented in a Webinar (29/07) entitled "Law Enforcement in TIP Cases: Ensuring Access to Justice and Fulfilling the Rights of Victims and Witnesses". Attending this Webinar were the Deputy for the Protection of Women's Rights of Ministry of Women’s Empowerment and Child Protection, Mrs. Ratna Susianawati; Assistant Deputy for Transnational Crime and Extraordinary Crimes at the Coordinating Ministry for Human Development and Culture, Brigadier General Pol. Dr. Bambang Pristiwanto, S.H., M.M; and speakers who played a role in law enforcement including the Criminal Investigation Police (Rosdiana Marbun, S.H), the Attorney General's Office (Idianto, S.H., M.H), the Witness and Victim Protection Agency (Livia Istania DF Iskandar), and LBH APIK (Uli Pangaribuan).

This webinar was followed by a talk show commemorating World Day Against Trafficking in Persons (30/07) entitled "Integrated Services for the Protection and Fulfilment of the Rights of Victims and Witnesses of TIP". In her opening remarks, the Minister of Women's Empowerment and Child Protection conveyed the data collected from the Online Information System for the Protection of Women and Children (SIMFONI-PPA) in 2021, namely as many as 255 victims of TIP reported and received services. Based on data from the Criminal Investigation Unit of the Police, the majority of the modes of TIP that occurred were acts of sexual exploitation, Indonesian Migrant Workers, and Household Assistants.

"To eradicate TIP requires synergy with all parties, one step that everyone can take is to cultivate sensitivity and empathy for the surrounding environment." said the Minister of Women's Empowerment and Child Protection, Bintang Puspayoga. The Ministry, which is now mandated as the final referral service provider for handling women and children’s victims of violence, including TIP, has prepared a Complaint Service for Women and Children through the call center at 129.  With this hotline, every complaint report will be recorded and rapidly responded to fulfill victims' rights according to their needs will be prioritized.

In this commemoration, the Ministry of Women’s Empowerment and Child Protection as the ATTF Secretariat also emphasized its commitment to eradicate TIP in Indonesia through the Revised Standard Operating Procedure (SOP) on Integrated Services for Victims of Trafficking in Persons, in collaboration with IOM. This SOP was revised based on the principles of non-discrimination, non-stigma, and human rights approach in dealing with victims of trafficking in persons. For this reason, SOP is expected to be able to support optimal services for victims of trafficking in persons, including during the COVID-19 pandemic.

“This revision of Standard Operating Procedures is a welcomed breakthrough to eradicate TIP. This document addresses all the different implications TIP has and how it should not be seen exclusively through the law enforcement paradigm. TIP needs to be looked at more broadly, including through a human rights approach to ensure victims are always put at the center. IOM looks forward to continuing working with the Indonesia Government to support the implementation of these SOPs,” said Theodora Suter, Deputy Head of Mission for IOM Indonesia.

This talk show concluded the series of World Anti-Trafficking Day commemorations while campaigns on social media are continuing, such as the TIP quiz game feature on IOM Indonesia's Instagram. The Ministry of Women’s Empowerment and Child Protection, IOM, as well as representatives from government and non-government institutions invite all parties to work together and synergize in eradicating this extraordinary crime. Synergy together for better eradication of TIP.