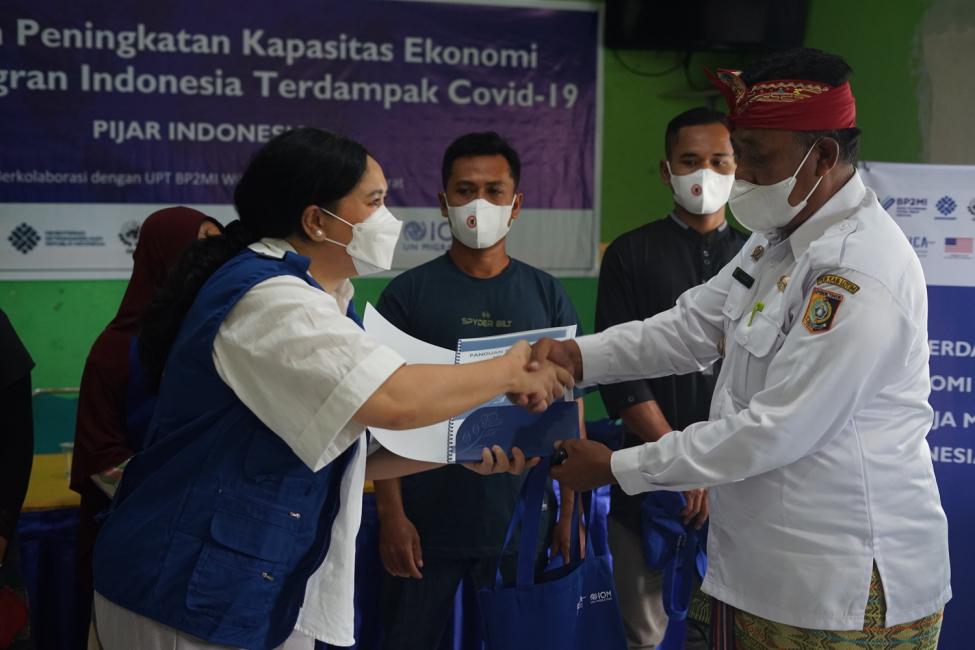 Indonesia – IOM and Semut Nusantara have concluded its series of roll-out trainings on economic empowerment, participated by a total of 809 (male: 254, female: 557) migrant worker returnees and their household members in East Flores (NTT), East Lombok (NTB), Wonoboso (Central Java), and Karawang (West Java). The series of trainings were held in August 2022 until November 2022.

Home to hundreds of thousands of migrant workers, Indonesia was not exempted from the impact of the COVID-19 pandemic, in which many returning migrant workers lost their livelihoods, and their households became more vulnerable since most of them depending on the remittances sent home. An earlier survey conducted by IOM at the beginning of the pandemic in 2020 has highlighted the urgency for an effective and sustainable economic reintegration plan to support migrant workers and families, as more than 70% of the survey respondents expressed significant household income decrease.

“As a partnership initiative, PIJAR Indonesia, meaning "light" in Indonesian and stands for the Economic Empowerment of Indonesian Migrant Workers, aims to support the Government of Indonesia's efforts in mitigating the severe socio-economic impact of the pandemic experienced by Indonesian migrant workers households through various forms of capacity development activities,” as explained by Shafira Ayunindya as the National Project Officer.

The trainings, which were developed at the community level and based on the training materials developed under PIJAR, comprised of three different stages, namely Internalization, Orientation, and Mastery. The first one, “internalization” stage, was participated online by the migrant workers and their family members to help them in identifying the internal motivation and barriers related to their livelihood endeavours. The second stage, “orientation”, serves as the opportunity for participants to engage in a two-day interactive training co-facilitated by the previously trained government and non-government trainers and is expected to help them further in building their entrepreneurial and personal branding skills. Topics such as business ideation, financial literacy, and developing curriculum vitae were among the taught courses. While under the “mastery” stage, interested migrant workers participated in more advanced and specific coaching clinics delivered by expertise from private companies and government-affiliated institutions on access to capital,  online and digital marketing, product design, and product licensing, among others. Following this stage, participating migrant workers also continued to be engaged through remote assignments and continuous online coaching.

“Economic empowerment training benefits returning migrant workers because they sometimes do not know what to do with the money they collected while working abroad. Returning migrant workers usually spend their money on consumptive activities, leading them to re-migrate for work,” said Ni Kadek Ernawati from Indonesia Migrant Worker Protection Service Center (Balai Pelayanan Pelindungan Pekerja Migran Indonesia) West Nusa Tenggara Province, who previously participated in the Training of Trainers and was selected to be a co-facilitator.

Participants are also provided with online learning materials through podcasts available on social media. Through these trainings, most of the returning migrant workers and their families expressed to have gained practical knowledge of entrepreneurship skills to support themselves and their families in re-establishing adequate and sustained income generation.

"I have a number of businesses, and I learned many lessons for my business, such as determining the right price and promoting products through social media platforms. During the training, other participants and trainers have also become more aware that I sell Sambal Nyonya Aaron. After the training, I plan to prepare the license or certification for my products so they can enter the marketplace, such as Alfa Mart," said Martha Rikhadela, one of the participants in East Lombok, who was a former migrant worker.

PIJAR Indonesia is supported through IOM’s COVID-19 response and recovery program funded by the Korea International Cooperation Agency (KOICA) and the Bureau of Population, Refugees and Migrants (PRM) of the United States Department of State.

IOM, POLRI, and INL Collaborate in Enhancing the Trafficking in Persons Investigation Skills Of the Law Enforcement Officials at the Border Regions